Halifax Harbour historically known as Petit Harve meaning "small harbour" because it resembles the main harbour at St. George's is no ordinary site. Geologically, it is said to be the remains of a volcanic crater that erupted some 15,000years ago. The area was used extensively by the Amerindians and the early European settlers, who grew coffee and established the mountain village called Mt. D'or.

Halifax Harbour has been associated with the old trade of smuggling, which in 1770 brought to Grenada "Red Ant" which became such a pest that it destroyed the entire sugar plantations of Woodford and Perseverance. It took the passage of a hurricane to get rid of the pest.

However, the area recovered to the extent that the British authorities saw the construction of a small fort that once occupied the site of the old Great House. It was once the most important area for all the surrounding villages with the sugar mill, the estate shops, store and bay house.

Interesting to note, the area is not only a safe anchorage during storms and for fishing but was the main assembling point for those who traveled by boat to the market at St. George's. 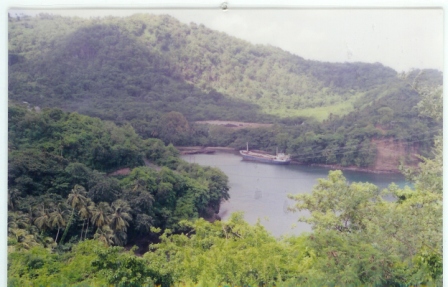